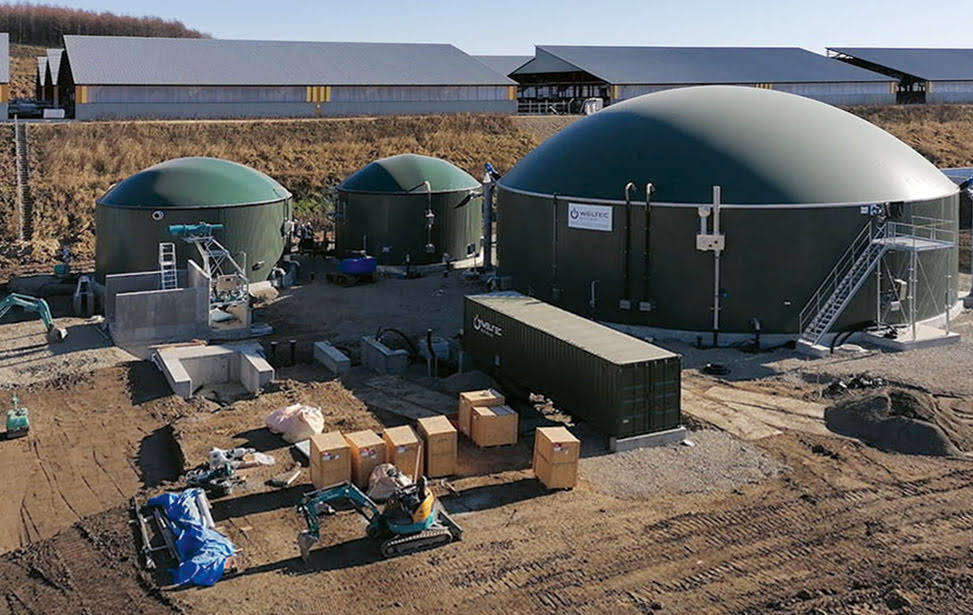 WELTEC BIOPOWER is currently setting up two agricultural 250-kW biogas plants for one of Japan‘s major milk producers. One of the plants is being set up in Urahoro on Japan‘s island of Hokkaido. The second plant is being built in Sakata in the prefecture of Yamagato on Honshu, the largest island. The structural design of the two biogas plants takes the earthquake risk in these regions into consideration. The generated power and heat will be used directly on site in order to enable energy autonomy. The commissioning will take place in summer 2021 in Urahoro and in autumn 2021 in Sakata.

Following the Fukushima nuclear disaster in March 2011 and thanks to the support of renewable energies, biogas enjoys a good reputation in Japan. Among the renewable energies, biogas is considered to be a weather-independent energy source that makes a significant contribution to the required grid stability. Additionally, the preconditions for the development of biogas are favourable, since despite the limited availability of other raw materials, Japan boasts plenty of biomass potential. Efforts to promote biogas projects had already started in 2002. A short while thereafter, WELTEC built its first „Made in Germany“ plant in Japan. However, the pace of development in this area picked up only after the government introduced the feed-in tariff for green energy in July 2012.

WELTEC‘s latest biogas projects in Japan are hybrid dairy farms. This means that the embryos of special beef cattle breeds are transferred to dairy cows, allowing the farm to produce both milk and beef. Every year, the two locations of an agricultural company group yield approximately 30,000 t of liquid cattle manure, which will be used for the energy production in the anaerobic digestion plants. To ensure efficient digestion, WELTEC BIOPOWER is setting up one stainless-steel digester in Urahoro. In Sakata, WELTEC is building two digesters, as the animal headcount will soon be increased. With a height of 6.3 m and a diameter of 25.34 m, the three bioreactors will each have a capacity of 3,176 m³. The benefits of stainless-steel tanks include compact shipping in just a few containers from Europe to Japan and easy adaptation to the structural requirements in earthquake regions.

At the Urahoro site on Hokkaido, the liquid substrates will be pumped to the digester from three upstream storage tanks. Two of the three pre-storages are already in place, but are being furnished with state-of-the-art technology. WELTEC is building the third pre-storage tank with a capacity of 393 m³ from scratch. Its height is 5.03 m, and its diameter measures 9.98 m. A pre-storage of the same size is also being set up in Sakata. Due to the cold winters with a lot of snow, the pre-storage tanks at the two locations will be insulated and furnished with gas-tight double-membrane roofs. Additionally, WELTEC is setting up a digestate storage tank with a capacity of 524 m³ for each location. Following the separation, the digestate will be spread on the company‘s own fields as fertiliser. Apart from the digesters, upstream and digestate storage tanks, separation and pump technology, WELTEC BIOPOWER is also setting up a 250-kW CHP unit at each of the locations.

Based on the customer’s specification, the plants will run in parallel grid operation. Therefore, both construction projects are viewed as pilot projects in Japan. The fact that the power will not be fed into the grid, but will be used for the rotary milking parlour and other facilities, makes the operator more independent from the power grid. This makes sense from an economic perspective, as the grid capacity and stability in Japan is endangered especially in the earthquake areas. The fact that the framework conditions for the development of bioenergy are favourable is a great advantage: The yearly biomass potential in Japan amounts to approximately 284.4 million t, enough to produce about 13 billion kWh of electricity and continually supply 2.8 million households. At the bottom line, the efficient utilisation of raw material in biogas plants such as in Urahoro and Sakata contributes to the economic viability, eco-compatibility and security of supply and thus to the success of the energy transition in Japan.