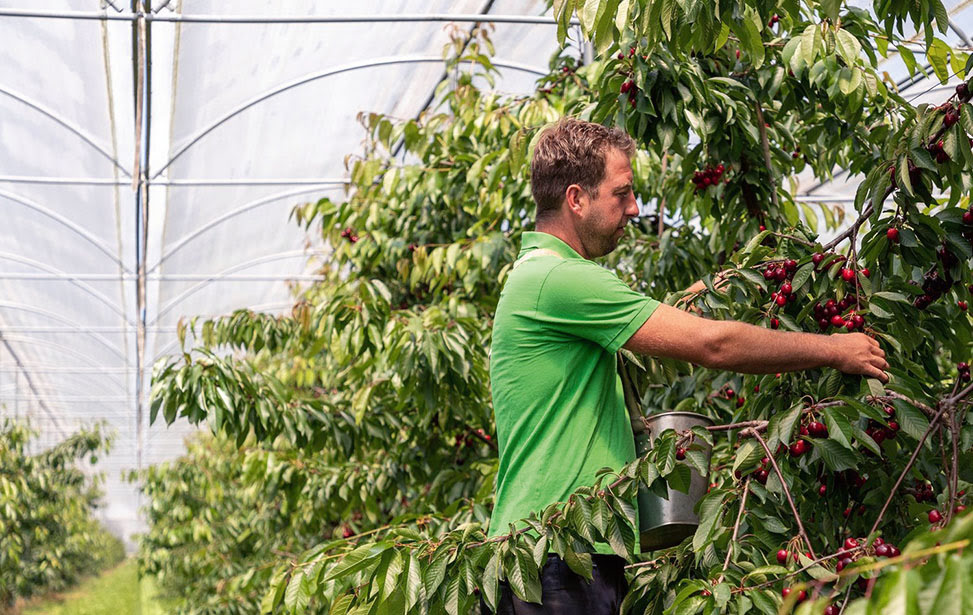 It's good cherry eating at FerryCherry in Hedel (NL). Ferdie van Eck has been growing them since 2008. After a modest start on 1 ha, he expanded his business by 2.5 ha in 2010. Another hectare was added in 2020. In mid-May, the roll-up film of the Rovero Rain canopies is pulled over the arches to protect the fruit from birds and precipitation. "A dry crop keeps fungi at bay," he says. "These cause yield loss and limit shelf life."

Transparent foil from mid-May to early August
For most of the year, wind and weather have free rein in Van Eck's cherry orchard. The transparent foil that he uses to protect the fruit from mid-May to early August is then rolled up tightly against the ridges of the arched shelters that he had installed by Rovero. Mid-May lies a few weeks before the start of the harvest period. In the Netherlands, this gets underway in June. Two months later, the last cherries have been picked and the foil is rolled up again from the roofs and facades.

﻿No rain, no birds
"Once the cherries start to color, I want to keep them dry," says the fruit grower. "Moisture on the fruit quickly produces weak spots and allows some fungi, such as Botrytis, to germinate easily. Hailstorms are completely disastrous in this regard. Mold not only causes direct yield loss on the tree. Problems with mould also mean that you have to make tighter selections during harvesting and that you spend more time on quality control. Both yield loss and time cost money, so it's best to stay away from them."

The canopy serves a second purpose: keeping birds out. These also love ripe and ripening cherries. "Birds are a growing problem, especially pigeons," explains the fruit grower. "Some even eat unripe fruit. For that reason, we pull the canopy shut around mid-May these days. Previously, this was done just before harvest."

In the past - to some extent still today - birds and hail damage were kept out by stretching hail nets over the orchard. Growers then had to continue to put up with rain. Retractable canopies made of sturdy, transparent film offer additional protection. They are available in several types. According to Van Eck, the Rovero Rain shelters are in the higher market segment.

Labor savings
A strong point in a figurative sense is the labor-friendly nature of the Rovero Rain canopies. Van Eck: "Rolling out takes much less time than, for example, the Vöen system, which is still in use. I save costs every year. I've never regretted knocking on Rovero's door for my first canopy in 2014, knowing I'd be spending a little more money there. I still like that canopy after eight years."

Value for money
Rovero is not the cheapest provider, but it offers great value for money, the North Brabant-based entrepreneur believes. "The shelters are well designed and elaborated. They have a robust construction, which does not require anchors and tethers on the outside," he says. "Foundation piles, screw anchors under the uprights and cross braces at the ends of the rows give the structure more than enough strength. In addition, the reinforced foil lies nicely taut, so it doesn't flap when the wind picks up for a moment."

The shelters are well designed and engineered. They have a robust construction, which does not require anchors and tethers on the outside."

Foil and hail net
The end walls (including two 6.4 m wide 'bird-proof' corridors for tools and internal logistics) and the lower part of the side walls consist of hail netting. This also applies to the lower part of the foil screens that lie across the arches. Through these mesh strips, which touch each other at the lowest point, each canopy can drain to two sides over its entire length, right above the grass strips between plant rows. "That's where it's allowed to rain, because nothing beats natural irrigation," the grower says superfluously.