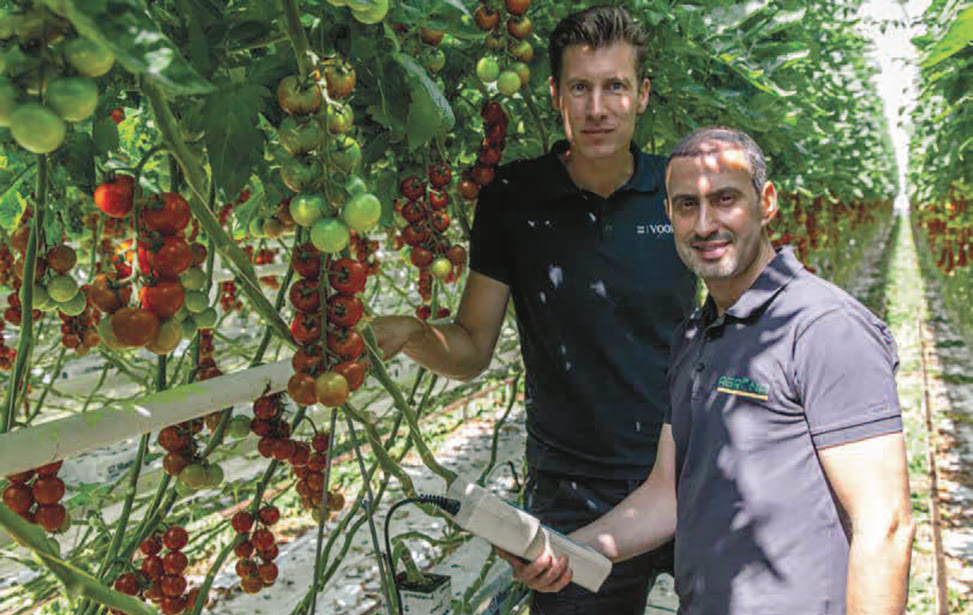 Enough oxygen in the root-environment is a condition for a strong and healthy cultivation. More oxygen makes the cultivation stronger and leads to higher productions. That is the experience of Van der Voort Tomaten in Vielpolders. The company uses a water handling application which keeps the oxygen level optimal.
The company produces on an 8-hectare mini plum tomatoes and cocktail tomatoes. Light is built on 3 of the 8 hectares. The company on the Tuindersweg is the second establishment, the main establishment of the Prominent lies in ‘s-Gravenzande.
A few years ago, Van der Voort bought the company in Vierpolders. The water basins were already aerated with the Oxybull water handling application of Agrona. “It was part of the operating device and we kept using it”, said Joost van der Voort. “Until the system fell out one time, we saw the difference. The suppler of enough oxygen to the roots stopped breathing, the cultivation became less vital and the heads were no longer fresh.”

MORE GROWTH, HIGHER PRODUCTIONS
The system uses plates which are in the water basin. A pump ensures that the air is pressed through a cloth with a lot of little membranes. So it adds millions of minuscule air bubbles to the water. The system is a big investment, but according to Van der Voort a good effect. “The malfunction made clear what the added value is. We had used three units, recently we have invested in a fourth unite and we started to use the measurements.”
Director Nadir Laaguili of the manufacturer explained the importance of enough oxygen. “Research has showed that more oxygen in the root environment ensures more growth and higher productions. A deficit in roots leads always to a restriction of growth.”

BOOSTER FOR MICRO-ORGANISMS
A level of ten milligrams per litre is by the way the maximum. Extra oxygen for the plant has no point, because the cultivation doesn’t know how to begin with the oversupply. Also, the water cannot hold a bigger volume of oxygen. Hence the upper limit of ten milligrams per litre. According to Laaguili, a higher level also leads to a better ingestion of nutrients. Oxygen is essential for favourable, aerobic bacterium. “If the breeder sends extra oxygen from the daily stock, he sees the consequences in his cultivation. The plant can feed itself better, that will give the cultivation wins on vitality and it will grow better. Also, the valuable micro-organisms in the medium get a booster. So, the bottom food web will be stronger and you will see this inter alia in a bigger plant resistance.

ALWAYS GROW MORE NATURAL
Van der Voort uses the water handling application in combination with the AG-Stim by Agrona. It feeds and activates the valuable bacterium, that will give a faster ingestion of nutrients. A side-effect of this product is the fact that organic materials will degrade and will be transposed in inorganic material, that will give cleaner pipes. Laaguili: “The volume is negligible, but: the inorganic material is food for the plants and shall be included in the cyclus.”
The breeder: “A treatment with chlorine or hydrogen peroxide is not necessary anymore. And that is what we want: to always grow more naturally, always less chemistry. In the past, we worked with ECAwater, or electrochemical active water. But also, this didn’t fit in such a cultivation as naturally as possible. So, we stopped with this technique. And chlorine or hydrogen peroxide also runs counter to a sustainable and natural cultivation, because it’s destroying the microbiology.”